SupportAbility Board of Directors 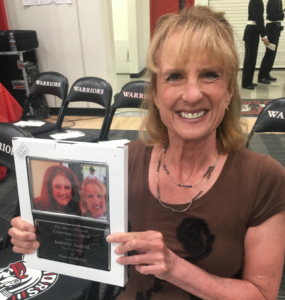 Chairman of the Board

Julie epitomizes the standards for which Supportability, currently given over a million dollars, stands for. A woman of extraordinary courage, Julie suffered a stroke at the age of 15 which left her in a coma for five weeks and hospitalized for six months. She was literally incapable of doing anything; she did not even have a coughing reflex. Julie was not defeated, however. After endless hours and years of challenging physical therapy, she slowly, courageously worked to regain sight, speech, the ability to walk, read, and do things we normally take for granted. Julie went on to graduate with her class from Mater Dei in 1985 and USC with honors in 1989. She graduated with a B.A. in English. She went on to found SA after learning about non-profit organizations from her work with local organizations.

After beginning SA Julie received the Clara Barton Spectrum Award by the O.C. Red Cross, Outstanding Women in Orange County by the We Give Thanks Foundation, the B of A Neighborhood Hero Award and was honored by Mater Dei High School with the Ring of Honor Award.

SupportAbility will begin its twentieth year and has awarded over $900,000.00.

Nancy earned a B.S. in Education from USC in 1962. She and her husband Derek have three adult children. Her firstborn, Michael, was born with cerebral palsy, and it was in dealing with this unexpected challenge that Nancy‘s compassion and desire to help others was ignited. A frequent speaker at women’s groups, and a mentor to those who can be encouraged from her life experiences, Nancy serves on the Board to support those who are overcomers who live with disability on a daily basis. Recognizing all that this entails, and all the obstacles which constantly present themselves to the disabled, Nancy considers it a privilege to serve on the board where Julie is a champion of courage and where courage can be rewarded. She and her husband are also founding members of the Shea Therapeutic Horseback-riding Center where Mike, their son, was one of the first participants.

After graduating in 1962 from USC, with honors, with a B.S. in Education, Patti (mother of Julie Inman) has enjoyed keeping in touch with her Kappa Kappa Gamma sister‘s. She always kept her hand, head, and heart in some phase of education. She is a collector of all things vintage especially Valentines and has taken several trips with the Valentine’s Society. She is in two book clubs and was Vice President of the Irvine Tycoons, where she was a member for 15 years. She was a full-time classroom teacher, private tutor, and past employee of the Sylvan Learning Center for fifteen years. Currently she has her own tutoring business. She has loved the idea of rewarding courage by awarding scholarships to special young people who are so often overlooked, but who have overcome real difficulties in their lives . She is the recording secretary of SA and a great all-around aid to Julie.s.

In 1959 Katharine earned her B.S. in Education at USC, and taught kindergarten before starting her family which now includes seven children and seventeen grandchildren. Always active in community affairs, Kathy has been a member of the Assistance League of Santa Ana since 1969. She has served on various committees and currently works with the Katharine Irvine Auxiliary whose members work in the Dental Center and provide low cost dental care and education for the needy. Katharine is also a member of the Santa Ana Alumnae chapter of Kappa Alpha Theta and St. Cecilia Church in Tustin. Having 2 brothers who had cancer, she has witnessed the difficulties one experiences with such a disability. Therefore she is very happy for the opportunity to help those who find themselves in difficult circumstances and is encouraged by what she has observed of Julie’s courage and indomitable spirit since her stroke. She feels privileged to know Julie who has met her challenges head on and has never asked, “Why me ?”

Neena earned her B.A. and Teaching Credential at UCLA. She later earned a Special Eucation Credential at UCI. She is married, has three grown children and five grandchildren. Neena has been a Special Ed teacher and Department Chair at University High School in Irvine. Presently she tutors once a week at that school, and serves as House Captain for Rebuilding Together O.C. She is also affiliated with the Bowers Museum. Neena is excited about expanding opportunities for people with disabilities because she has had relatives with MS and Cerebral Palsy and has felt that their opportunities were so very limited. She also wants to be able to provide hope and encouragement to Special Needs students, who need it so badly.

Jean currently retired as co-owner of a company that is responsible for marketing computer keyboards to schools and districts. A mother of 5 children who all grew up with Julie. She has 12 grandchildren now. Jean has always been active in the Catholic Church and a model citizen for many. She keeps the SA Roster on her computor and maintains it.

An engineer from Boeing who is currently retired. He is active in other non-profits, such as Rebuilding Together. He serves as the Southern California region President. This is a group that aids and assists the disabled create accessibility for themselves. Cy has finished every L.A. Marathon and is the husband of Jean. He enjoys traveling with his grandchildren.

Active family man and past dedicated supporter of SupportAbility. Works for Hewlett Packard Lives with his wife and one son, currently attending high school. Also has twin daughters in college.

Mother of adult three children and grandmother of three. Worked with her husband who has since passed away. She set up a scholorship at their college alma mater in his name. Involved in Catholic ministry. She also enjoys spending time with her 96 year old father.

Kelly is a Certified Public Accountant and Certified Financial Planner. She and her husband Bill have lived in Irvine for over 30 years.

With a commitment to giving back to the community, Kelly has volunteered with local non-profits as well as the Irvine Schools. She was a founding member of the Irvine Public School Foundation’s Afterschool Classroom Enrichment Program and served on the Boards of both the Junior League of Orange County and the Irvine Chapter of National Charity League.

Kelly is inspired by SupportAbility’s mission to recognize and reward courageous students and feels privileged to serve on its Board of Directors.

I attended Stanford University where I majored in Psychology and then received my law degree from the University of Southern California. After practicing employment law as an Assistant General Counsel for Boeing, I later served as the first Executive Director of the Quiksilver Foundation.   Currently, I am Vice-Chair of the Board of Directors for the Hoag Hospital Foundation . My husband, Dwight, and I live in Irvine where we raised our three children. I am so honored to be a part of Supportability and to assist Julie in her mission to reward the courage of students who have overcome tremendous obstacles to graduate.

Joanne earned her B.S. in Accounting/Business from Muhlenberg College. She worked as an auditor for Peat Marwick (now part of KPMG), then went into pharmaceutical sales. She enjoyed working for Serono Laboratories where she had the opportunity to help families with fertility issues, experience the miracle of having children.
Joanne has three sons and became a full time mother and volunteer after her son was born. Joanne’s son earned a scholarship from SupportAbility, the gesture of kindness and recognition changed her son’s life.  He was finally honored for the outstanding courage he displayed on a daily basis. Now she wants to help other families and children with challenges experience the same joy and boost in self esteem.

Linda holds a B.S. in Education from the University of Southern California and began her career in education in 1962 where she taught elementary grades in the Newport Mesa School District prior to the birth of her children.   Later she taught middle school in the Capistrano Valley School District.  Along with her husband Bob she helped found Mission Hills Christian School in 1980 where she was a teacher and administrator for thirty-one years.  She is currently retired, active in her church and P.E.O. and very much enjoys working with the fine Board members of SupportAbility to reward and encourage deserving students.  She feels privileged to work with Julie who is a wonderful example of courage herself, and who is tireless in her pursuit of helping others to become overcomers rather than victims.

With your financial help, SupportAbility continues to provide scholarships to seniors from over 17 high schools every year.
Thank you for your support.